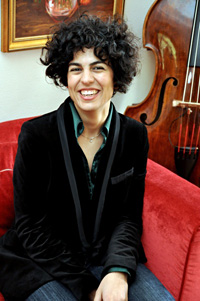 Inma Galiot is a composer, double bass player, guitarist and band leader from Cordoba (Andalusia, Spain), where she began guitar lessons at the age of 9 at the Conservatorio Superior de Córdoba Rafael Orozco. In 2006 she started a new degree in jazz double bass at the Escola Superior de Música e Artes do Espectaculo (ESMAE, Porto, Portugal). In 2008 she was accepted at the Rotterdam Jazz Academy (CODARTS) where she studied double bass and composition. Inma created her sextet as a band leader and composer, being finalist at the Concurso de Jazz de Barcelona (Barcelona Jazz Competition) at the Jamboree Club in July 2009.

Galiot finished last year a master degree in film scoring at the Filmuniversität Babelsberg Konrad Wolf in Potsdam, Germany. Nowadays she lives as a musician in Berlin composing music for movies and leading and performing with her jazz sextet Inma Galiot & La Rosa Negra with which she released her debut album Tierra in 2015 (Unit Records). Her last project is the soundtrack for the graphic novel Evelyn by Andrés G. Leiva, which was performed live in April 2016 by Inma ́s quintet and is going to be released this year as a movie.